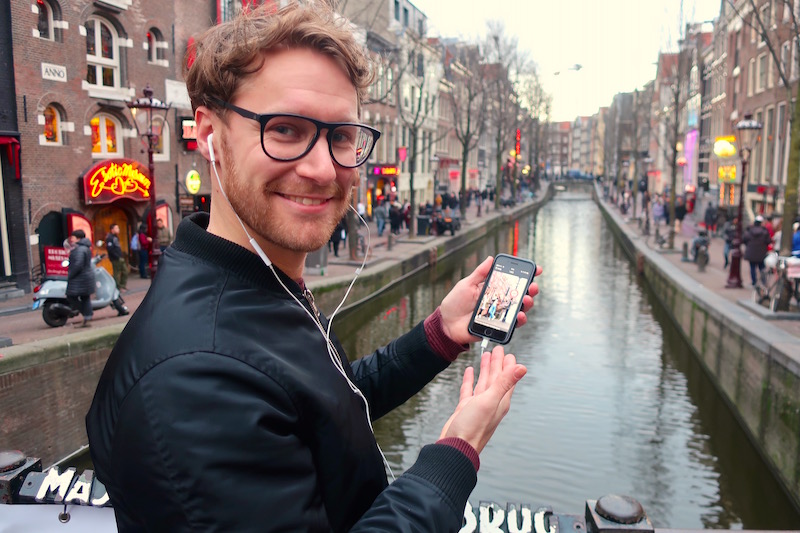 Our app Amsterdam Audio Tours offers a Red Light District audio tour. Experience Amsterdam’s famous ‘Wallen‘ area together with a virtual audio tour guide Sophie and “meet” 22 experts along the way. Start, pause or finish whenever you like.

Highlights of This Audio Tour:

With the app Amsterdam Audio Tours you can discover the Red Light District on your schedule, at your pass. Navigate the so called ‘Wallen’ area with the help of virtual tour guide Sophie, GPS and 22 expert that you’ll ‘meet’ along the way.

With this Red Light District audio tour you won’t be shackled to a tour group. Your eyes won’t be glued to guide books or gadgets. Just keep your eyes open and follow Sophie’s lead. You’ll safely walk down back alleys and push through secret passageways, to where the real hart of Amsterdam beats.

Bring friends if you want. You can listen together. The virtual tour guide will point out all the wonders in the Red Light District. We’ll peel back layers of history as if the walls could talk.

How does it work?

Simply buy the Amsterdam Audio Tours app in the App store here. After you’ve bought the app you’ll have to download the Red Light District Tour. Simply press the download button once you open the app and click “start tour”. The first page that you’ll see contains all the instructions for ease of use. After that you can simply follow the GPS-map. You can pause or stop the tour where- and whenever you like and simply pick up later where you left off.