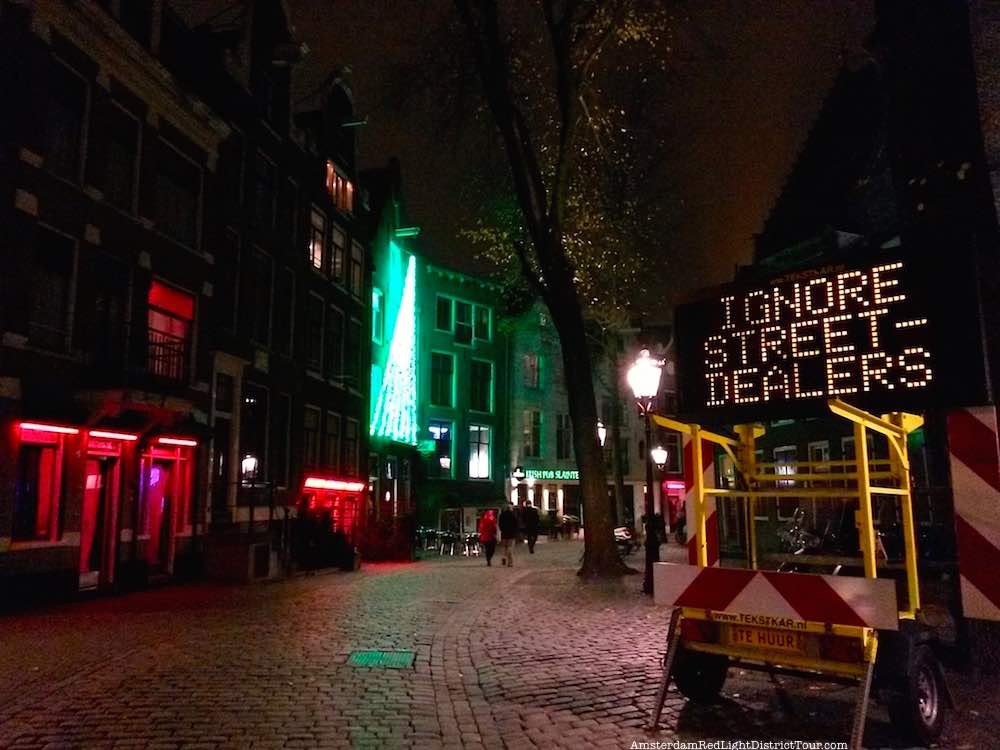 On The Hunt With The Undercover Police In Amsterdam

Two men in alien suits are walking in the Red Light District, singing and dancing, screaming and cheering. They look drunk. Every twenty meters they check the drink menu of a bar. Until they get asked if they are interested in some cocaine, xtc or speed. “Good stuff, want to try it?” asks the short man with a white cap. The aliens tell him that they aren’t interested. At that point colleagues of the men in alien suits have to make their move. In an adjacent street amidst hundreds of tourists stands Jeroen Hahn with other members of the Priority Police Team, specialised in pickpocketing. They are part of the undercover police in Amsterdam. Their mission for this night: “arrest fake drug dealers”.

Varied products are being presented as real drugs whilst being regular household items. Small pellets of molten candle wax are sold as crack cocaine. Grounded up Dutch cough lozenge tablets go for heroine, moss from the closeby flower store is presented as weed and a piece of shoe sole is sold as hash. Another favourite among dealers is lidocaine. Intended to be used for the treatment of haemorrhoids and premature ejaculation, sniffing the substance gives the same effect as cocaine. All the dealers in the Red Light District buy the stuff for 1.50 Euro per gram and sell if for 50 Euro per gram.

According to the undercover police in Amsterdam the group of street dealers is growing. They believe that the growth is correlated with the booming tourism in the city and the Red Light District. You’ll find the street dealers wherever there are English, Italians, Spaniards, Saudi’s and Americans. The dealers come from all parts of the Netherlands and even Belgium. In the last two years a total of 3000 arrests were made.

A New Type Of Drug Dealer in Amsterdam

The whispering little men on the streets are an image problem for the city of Amsterdam, annoying and possibly dangerous. The biggest danger lies in the addition of new ultra young and aggressive fake drug dealers. Team leader Hahn gives a warning on the kids in town. They are more violent than their older drug addicted counterparts and armed. Failed dealings often end up becoming a street-robbery. “These boys often have knives, never make an arrest on your own.”

Teamwork To Catch The Bad Guy

For this reason the Undercover Police In Amsterdam will work in groups of three or four tonight. They should behave themselves like regular Red Light District visitors: strolling around with an empty beer bottle. Fake drug dealers are sharp and relay descriptions of undercover officers to each other. For this reason the group has decided on wearing the alien suit.

After Jeroen Hahn and his team arrest the short man with the white cap they add his name to the white board: number seventeen of the night. Most of the arrested dealers don’t stay in jail for long. Most of time just an hour. The problem is that the selling of fake drugs is not regulated under Dutch drug laws. New offenders will only get a maximum fine of 250 Euro and a 24-hour ban from a certain area in Amsterdam. Repeat offenders are not allowed to enter the district for half a year.

Can The (Fake Drug) Problem Be Solved in Amsterdam?

Arrests alone won’t fix the problem. Put double the amount of cops on this case and you’ll only catch twice the number of fake drug dealers. There are many, many more. Add other tourist areas like Leidse- and Rembrandt square and het Spui and you begin to understand that a week of undercover police in Amsterdam cleanup actions would be a drop in the ocean. Warning campaigns, more police, variable-message signs with information; they are all just temporary measures. A systematic solution is not available. “Nothing works, there is just too much money to be made”.