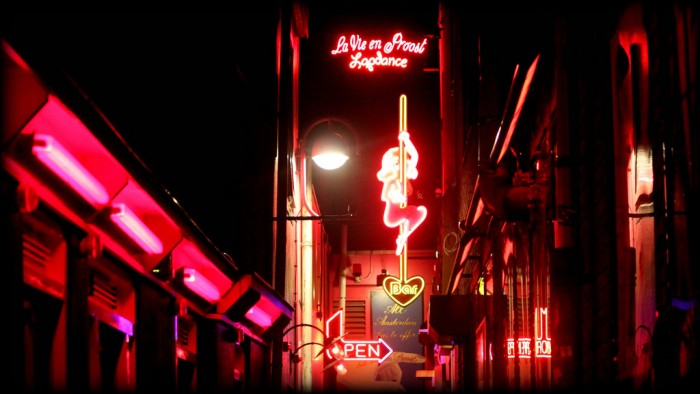 However, if you’re looking for the real best stripclub in Amsterdam we’d advice you to go check out Club BonTon. BonTon is way better than La Vie en Proost! It’s an awesome party place for women and men, with a beautiful interieur, gorgeous strippers and attractive bartenders. We wrote an article about BonTon.

When two of our local guides (Martin & Jan) were a bit younger, Martijn decided to take Jan to this strip club in Amsterdam. He just turned 18, back then. The age of a man! Therefor, Martijn decided to pay for Jan’s first lap dance. And the best place to this was in the Red Light District. In La Vie en Proost…

Martijn was 26 years old when this happened. He reached the age of a man a long, long time ago… So there they went, to the infamous lap dance bar La Vie en Proost. Jan was nervous, although he didn’t know that he would be getting a lap dance. And at this point, Jan also didn’t know what was going to happen…

They entered La Vie en Proost, paid the entrance fee, ordered two beers and watched the ladies. They danced on the bar, looking for guys who wanted to have a lap dance. Martijn started talking with one of the strippers. He whispered something in her ear and paid her 10 euros. Jan thought that Martijn wanted a lap dance for himself, but the stripper started walking towards to Jan.

Jan, being 18 years old, looked at the stripper and thought: “Okay, this is awwwwwkward…”. And yes then it happened. He got his first lap dance. A lap dance in Amsterdam’s Red Light District. That’s awesome, he thought. After 5 minutes she stopped with grinding. She looked at Jan’s beardless face. He was wearing a suit which was a bit oversized. She knew he was young. A perfect candidate who could spend lots of money on me, she thought.

She whispered in Jan’s ear: “Hi sweetie, I hope you liked my lap dance. Would you buy me something to drink?” He raised his eyebrows, but was willing to buy her a drink. “screw it, a beer or wine can’t be expensive”, he thought. But the stripper wanted champagne. Jan raised his eyebrows again, but still had this mindset of  “how expensive can a glass of champagne be”? So, she ordered champagne…

And there it was… a tiny bottle of champagne, a so called “Piccolo“. Now, Jan started to worry a little. The bartender said: “80 euros, please.” He didn’t have enough money, but the glasses were already filled. Out of the blue there was this big colossal bouncer. Jan said: “I don’t have enough money on me, I only have 20 euros and my debit card”. The bouncer told him, with a low-voice, that there was an ATM in the back and that he was more than willing to assist Jan to it.

At this moment, Jan didn’t feel like a real man. More like a boy who was about to get bamboozled by a stripper. Meanwhile, Martijn wasn’t paying attention to Jan. He was enjoying a lap dance from another stripper. Jan arrived back at the bar and paid the bartender. He tried to act like a big player, who didn’t have any cash on him. No biggie! Obviously, the bartender, the stripper and the bouncer knew otherwise…

Jan tried to enjoy the bubbles, for which he paid way too much! He tried to act like a high roller, but failed big time in doing so! 🙂

When the night came to an end, they arrived at Martijn’s place. This is when Jan confessed that he had spent 80 euros on a stripper. Martijn tried not to laugh, but couldn’t control himself. He laughed so long and hard that it hurt.

pointe Don’t do as Jan did. Don’t buy champagne for strippers (when your wallet isn’t filled). Don’t buy piccolo’s! 🙂