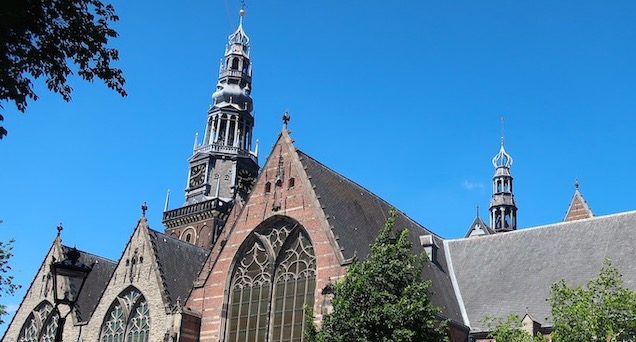 The Old Church in Amsterdam is a 15th-century Gothic church located in the city’s historic center. The church’s exterior is characterized by its large, rose-shaped window and ornate facade. The interior of the church is equally impressive, with a high ceiling and beautiful stained glass windows. The Old Church is one of Amsterdam’s most popular tourist attractions, and it is also used as a venue for concerts and other cultural events. The church is open to the public every day, and visitors can explore the interior or attend one of the many events that are held there.

The Oude Kerk – located in the heart of the Red Light District – is the oldest building in Amsterdam. The building was the center of late medieval urban life. Here, people partied, got married, prayed and mourned. It was church, community center and covered cemetery all in one. In addition to a floor with 10,000 dead Amsterdammers underneath, the church contained an ultra-secret room that no one was allowed to enter and a tower with Amsterdam’s oldest masonry. A time capsule was recently found in that tower.

Saviez-vous que Amsterdam’s Red Light District is the only place in the world where you’ll find religion and la prostitution literally in opposite of each other. The Old Church in Amsterdam is located in the heart of the Red Light District and is surrounded by window brothels, bars, cannabis shops, and magic mushrooms shops.

In the top left you can Amsterdam Central Station.

If you want to experience a unique and impressive church surrounded by window brothels and prostitutes, The Old Church in Amsterdam is the place for you. This Dutch cultural landmark should not be missed if you are interested in history, art, or architecture. Make sure to visit this one-of-a-kind attraction during your next trip to Amsterdam.

History of Prostitution In the Netherlands