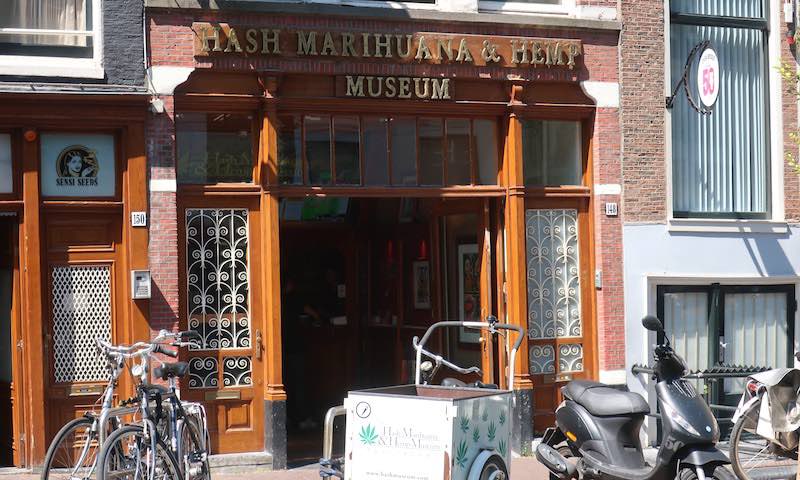 There are few places in the world where you can legally learn more about cannabis. It would therefore be a shame not to discover this unique attraction in Amsterdam. The Hash Marihuana and Hemp Museum offers everything you’d want to know about the fascinating cannabis plant and its use cases throughout the ages.

A visit to this amazing museum opens your mind to all the possibilities that cannabis has to offer. This unique attraction gives a good global historical perspective on the appreciation of cannabis, political activism and the medical background of marijuana.

Hash is a type of cannabis that is made by separating the trichomes – the resin-containing glands – from the rest of the plant material. Trichomes are rich in cannabinoids, which are the active compounds in cannabis.

Hash typically contains a higher concentration of cannabinoids than regular cannabis, making it more potent. There are many different ways to make hash, but all methods involve separating the trichomes from the plant material and collecting them into a concentrated form. Hash can be smoked, vaporized, or used to make edibles. It is also sometimes used to make topical products such as lotions and oils.

Hemp is a variety of the Cannabis sativa plant species that is grown specifically for the industrial uses of its derived products. It is one of the fastest-growing plants and was one of the first plants to be spun into usable fiber 10,000 years ago.

It can be refined into a variety of commercial items, including paper, textiles, clothing, biodegradable plastics, paint, insulation, biofuel, food, and animal feed.

Despite its widespread uses, hemp has been largely associated with its cousin – marijuana – and has been illegal in the United States since the 1937 Marijuana Tax Act placed strict regulations on hemp cultivation. In 2018, the US Farm Bill finally removed hemp from the Controlled Substances Act and hemp farmers across the country are now able to legally grow and sell their crop. Hemp sales are expected to exceed $1 billion by 2022.

How to identify hemp plant?

There are a few key characteristics that can help you identify a hemp plant. First, hemp leaves are relatively long and slender, with pointed tips. They are arranged alternately on the stem, and they have serrated edges. Second, hemp plants have thin, fibrous stems that are hollow in the center. Third, hemp flowers are small and greenish in color, and they grow in clusters. Finally, hemp fruits are dry and slippery, with hard shells that contain two Seeds each. If you see a plant that exhibits all of these characteristics, there’s a good chance it’s a hemp plant.

How is hemp different than weed?

While hemp and weed are both forms of the cannabis plant, there are a few key differences between the two. Most notably, hemp contains much lower levels of THC than weed, meaning that it does not produce the psychoactive effects that are associated with marijuana use. Instead, hemp is typically used for industrial purposes, such as making rope and paper. In addition, hemp plants tend to be taller and thinner than weed plants, with long, slender leaves. Hemp is also typically grown outdoors, while weed is typically grown indoors. Finally, hemp plants have a much shorter flowering cycle than weed plants, meaning that they can be harvested more frequently. Taken together, these differences make hemp and weed two very different types of plants.

Take the audio tour with you to get the most information about all the different exhibit pieces. At the entrance you can get a small speaker box which allows you to scan barcodes to get an added audio explanation.

The audio tour is available in Spanish, Italian German, English, Dutch, Portuguese and Russian and comes free with your entrance ticket.

History: Cannabis in Amsterdam in the 1970’s

“There is no plant that is so versatile, has such a wonderful history and so much potential for the future. Our aim is to show just how special this plant is and how varied its applications are.”

We interviewed the CEO of the Hash Marihuana and Hemp Museum. Learn more about cannabis from Ben Dronkers.

How much is a gram of weed in Amsterdam?

In Amsterdam, weed is sold by the gram. A single gram of weed costs approximately 10 euros. This price can vary depending on the quality of the weed and the supplier. The average cost of weed in Amsterdam is about 8 euros per gram.

How long does weed stay good?

When it comes to preservability, marijuana’s shelf life is pretty similar to other herbs. If properly stored, dried weed can last anywhere from 6 to 12 months. The biggest enemies of pot’s longevity are light, air and humidity – all of which can cause your weed to degrade and lose THC content.

To keep your weed lasting as long as possible, store it in a dark, airtight container in a cool, dry place. You can also extend its shelf life by keeping it in the freezer, although this may impact the taste and smell of your cannabis. All things considered, if you take proper care of your weed, you can enjoy it for many months to come!

For how long would marihuana show on drug test?

The amount of time that marihuana will show up on a drug test depends on several factors, including how often the drug is used and the type of drug test being administered.

Generally, marihuana can be detected in urine for up to 30 days after last use. However, for heavy users, the drug may be detectable for up to 90 days. Blood and hair tests are less common, but can also be used to detect marihuana use.

Blood tests can detect the drug for up to 24 hours after last use, while hair tests can detect drug use for up to 90 days. This means that if you are taking a drug test, it is important to know what type of test it is and how long ago you last used marihuana. Otherwise, you may end up with a false positive.

One Response to Hash Marihuana and Hemp Museum