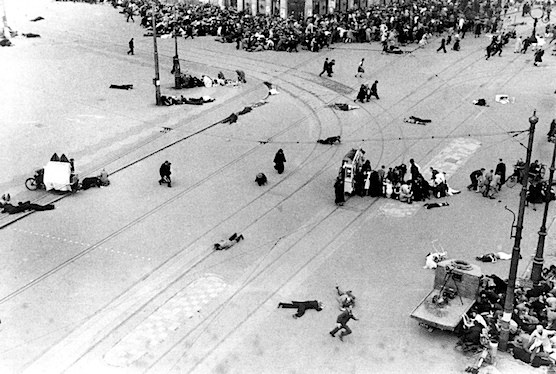 The Dutch Queen Wilhelmina escaped with her whole family to the United Kingdom. The monarch, who had been key in maintaining Dutch neutrality during the first World War, now found herself in a completely different position & made encouraging announcements to subjects back home via Radio Orange and the BBC.

Amsterdam, Muntplein, May 1945. A german soldier with a prostitute. (source)

The Hunger Winter in 1944 – 1945 was a desperate time in Holland. With the failure of the British-led Operation Market Garden the Allies abandoned all efforts to liberate the western parts of the Netherlands.

It’s the window I still look at when I am in Amsterdam, that in my memory people on the street were resting. I didn’t realize then that I was walking past injured or dead people, so mesmerised I was to tell those evil people how mean I found them. Fortunately I was picked up and brought to safety. This event on May 7th 1945 is still on my mind and of course it was only later that I understood what was really going on.’ (source)

German marines were stationed in The Grand Club (Groote Club) on the right. (Source)

‘Het Snotneusje’ before being restored. Source.

On the 7th of May 2016, a new war monument was installed for all the victims of the shootout. The victims, ordinary Amsterdammers who were killed on that day, which should have been a liberation day. All the names of the victims are engraved into separate stones that were placed into the street on Damm Platz.