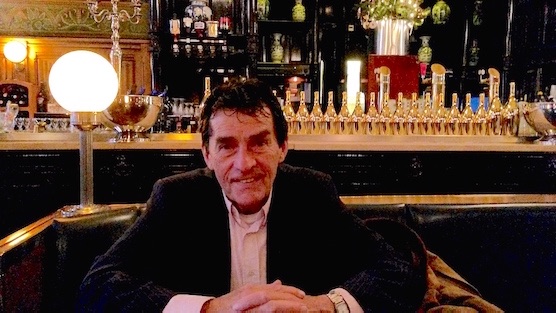 Roeland Kerbosch was the very first to film the Amsterdam Red Light District in the rough 60s. During his film he was accompanied by Haring Arie – a local pimp – who showed him De Wallen with prostitutes in front of the camera.

Roeland Kerbosch is a Dutch film director, film producer, photographer and writer. In 1968, he made one of the best movies about Amsterdam’s Red Light District. His Dutch documentary film “Rondom het Oudekerksplein” (translated: “Around the Old Church Square”) gave an unique impression of what life in the Red Light District was like in the 1960s.

Roeland was fortunate enough to met an infamous Dutch pimp and criminal called “Haring Arie“. In that time it was quite normal for the prostitutes to have a pimp, who usually also was the boyfriend. Haring Arie was willing to show Roeland around in the impervious world of pimps and prostitutes.

In the 1960s, Amsterdamer Rotlichtviertel became known to the general public. It was a time of ancient pimps and criminals with crisp nicknames like Frits of the World, Herring Arie, Pistols Paultje, Black Joop, Fat Lap, etc.

Prostitutes were called Blonde Mien, Paris Leen (see picture above), Chinese Annie, De Fokkens, etc. The Red Light District was known as an authentic & cozy area in Amsterdam. But behind all the cosiness and beautiful names there was also abuse and violence back then.

Blonde Mien (real name: Mien Sligte) was the wife of Haring Arie and worked as a prostitute in the Red Light District.

The picture above is a screenschot of the movie Around the Old Church Square made by film maker Roeland Kerbosch. Blonde Mien & Paris Leen both described their life in the film.

Arie Elpert – also known as “Haring Arie” (English: “Herring Arie”) was a Dutch criminal & pimp who showed Roeland Kerbosch around in Amsterdam’s Red Light District. Arie was a burglar in the thirties and after the Second World War he robbed some trains in France.

When he had enough of that he started selling herring on Amsterdam’s Rembrandt Square. This is why he was called Herring Arie. His trade in herring ended because he didn’t have a license for selling fish.

“My name is Roeland Kerbosch. I graduated as a film maker from the Dutch Film Academy in 1962, started from then on working for television as director and also as a camera man. In those days, you’d combined those jobs quite often. Then suddenly after making more or less important films, I met a guy named Haring Arie.

“Some time later I Haring Arie. I was making a few shots in the Red Light District for a short film about carillons (bells) of the Old Church and then suddenly Haring Arie was there. Kind of nosy he asked me who I was, what I was doing there and so on.

We started talking and I made a very short interview of him. While doing the interview I noticed that this guy was quite interesting and thought: He has probably much more to offer…. Haring Arie was my step into the world of whores and pimps.”

“Not as busy as it is nowadays, but I think it’s more or less the same as today. It’s people who make their money in a way that you and I would probably not like to make our income.

Amsterdam, Trompettersteeg, year 1968. Photo by: Elliot Erwitt. (Click on the pic to enlarge it.)

I think that it’s less aggressive than before, because in those days – in the 1960’s – it was not allowed to be a prostitute, let alone being a pimp. That changed over the years and now it’s an official profession, so that is a big difference.”

“Amsterdam’s Red Light District was like its own government. You had the prostitutes, the pimps, bars and some small shops – and that was it. That was an economy on itself – they didn’t need anything else.”

2 | Could you describe what kind of person Haring Arie was?

“Haring Arie was a very vane guy. When I met him he really behaved like “Follow me, I’m the boss of the Red Light District”, which was not true. In those days, he was not taken that seriously by the real important guys (like Black Joop). But through him I met almost everybody who was in those days influential and important.

Haring Arie was some kind of a messenger. He introduced me everywhere and we had a very good relationship. Thanks to him I made a lot of interviews with prostitutes, pimps and other people in De Wallen.”

“Haring Arie was a very small criminal and especially when you’d compare him with nowadays criminals. He was a pity thief, really small – but he was a nice guy! He always had a big mouth and that was impressive. I was impressed by him as well!

When I met him for the first time I thought he was a very important guy and it took a few weeks before I found out that he was not at all that important.”

3 | How would you describe the prostitutes in Amsterdam in those years?

“I think most of the prostitutes came from Holland. There were hardly no foreign prostitutes – maybe some German or Italian girls – but most of them were Dutch.”

“Not all, but lots of the women were just lured into it, you know. When they came to Amsterdam they didn’t what they could expect and they were probably not even aware of the Red Light District at all. But there was always a guy who took them through Amsterdam and would give them a “nice life” and so on. And then they became prostitutes…”

4 | Were there any drug dealers in Amsterdam in the 60’s?

“There were hardly no drug dealers. There was some heroin, but hardly anything. That also had its influence of course, because in those days it was overall less aggressive. There was also less money involved and it’s only in the 70’s that all the heroin came into Amsterdam and that changed a lot.”

5 | How was Amsterdam Red Light District for you back then?

“Very romantic! A village so to say. Around Amsterdam’s Old Church was a very romantic neighbourhood with a lot of history. That is still there, of course.”

6 | How long did you spend in Amsterdam Red Light District to make the film?

“The shooting of the film took about one year, I think. It was very difficult to make the movie because we had no money & no permits. I started with my own money. I bought some roles of film and started shooting.”

Red Light District Amsterdam, Old Church Square, 1969. A couple walks next to a brothel. The man can not resist to have a look. Photo by Cor Jaring.

“I showed it to a Dutch television station and they said “okay, we’ll finance a little bit”. In those days a little bit is a few thousand. The funny thing is, the film has never been shown on television in Holland. It has been shown everywhere, but not in Holland and I still don’t know why.”

7 | Did all prostitutes and pimps allow you to film them?

“Most of them were not okay with it – they didn’t like it in the beginning. I had to talk with them a lot to convince them for permission. I also used the argument that people around them may think that they were a bad person.

So I said: “Show it and then we know you’re not – that you’re just human beings like we all are. That was a strong argument. Plus I had the help of Haring Arie and his wife of course. From then on I happen to know more and more people in De Wallen.”

“I lived 10 minutes away from the Red Light District, so I quite often went there to look around and to see people without the camera. So the prostitutes and the pimps got to know me: “Oh, that’s the guy who’s making a film”. “

8 | Did you always go to Amsterdam Red Light District together with Haring Arie?

“No, after a while it was not necessary any more to go somewhere with him because people knew who I was. I always worked with my wife, my first wife. She did the sound and that gave some confidence, you know. When you see a guy with a camera and woman who’s doing the sound then you think that’s truth worthy. So that made it also easier, I think. And I must say that the people in the neighborhood were more honest because my wife was there with me. Especially among women it was easier to exchange knowledge and so on.”

9 | What did you say to the prostitutes in the Red Light District?

“Most prostitutes didn’t want anything to do with my film in the beginning because they were scared for their parents or they had other reason. But in the end, they were all quite happy with the film because it became a kind of presentation of the Red Light District. So, they trusted me and saw that I was honest in what I was showing.”

Blonde Mien & Haring Arie on the premiere-night of the film Around the Old Church Square in 1968.

“And we had a wonderful premier night at the theatre in Amsterdam. All the prostitutes went to the premier as well – with all the crowns in their hairs – it was really something special.”

10 | Are you still in touch with some persons you met in Amsterdam Red Light District back then?

“No, not anymore. I think most of them died. The people I met back then, were of my age or older. They probably passed away.”

11 | What would you like to say to those who want to visit the Red Light District?

“Welcome! You’re welcome to Amsterdam Red Light District. And, it’s exciting! I travelled a lot around the world and I must say that the Red Light District is one of those places in the world that has something very special and it’s very authentic!”