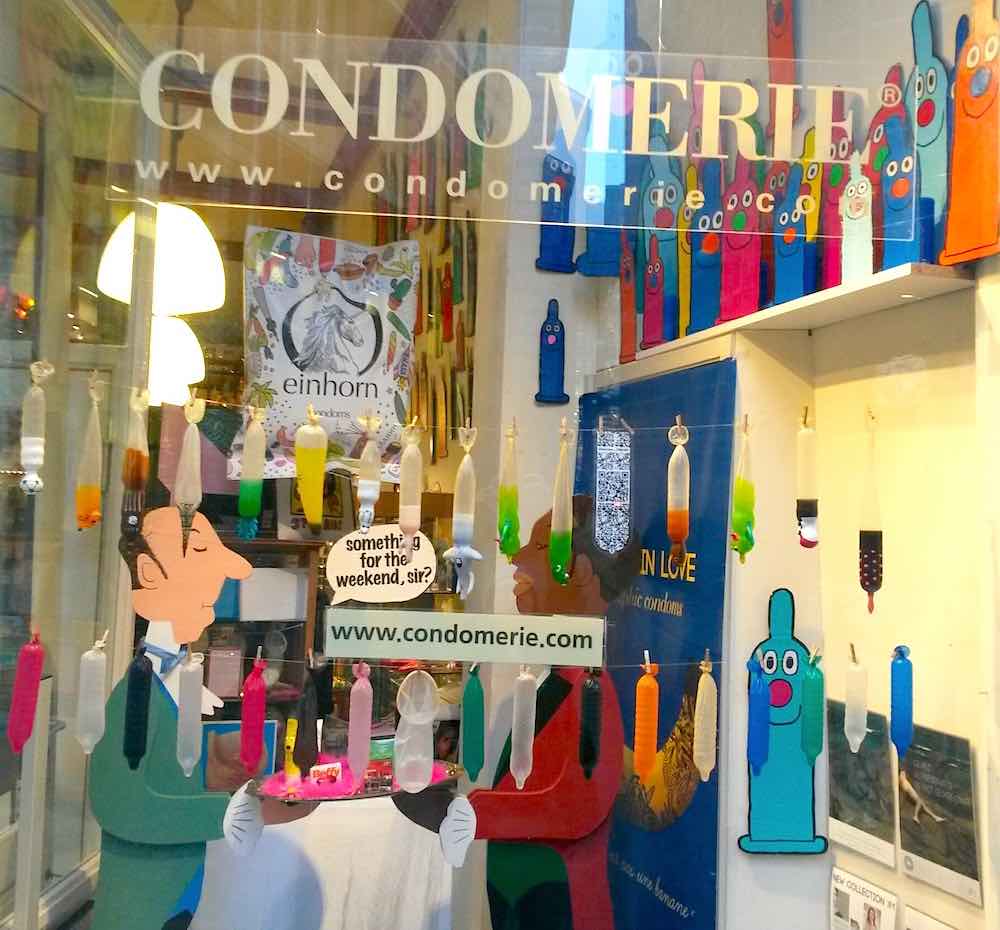 We spoke with Theodore van Boven who is one of the owners of world’s first condom shop which was founded in 1987, on the oldest street of Amsterdam. It was opened in a time when there were more sexual transmitted diseases (STD’s) in the Netherlands and when talking about sexe was still a taboo. Theodore, who lives in Amsterdam Red Light District – right above the condom shop, is a huge fan of sexual education at a young age. Early sex education decreases the chance on STD’s and teen pregnancy.

Fun fact: the child birth rate among teenagers in the Netherlands is one of the lowest in the world.

Theodore van Boven in front of the Condomerie – world’s first condom store. And the most famous condom shop Amsterdam.

History Of The Condom Shop In Amsterdam

When and why did you decide to start a condom shop in Amsterdam?

In 1987 on the 10th of April the idea popped up in our minds. A condom shop was necessary because of AIDS, the epidemic of the eighties. Acquired Immune Deficiency Syndrome (AIDS) was a deadly disease in those days. When you think about Aids you look, sour, sore and sad. We thought that if you make love in times of aids but you use a condom you can smile again! And that was the philosophy, to give the smile back to the people with safe sex. On the 20th of April we decided to do it and we opened the shop on the 30th of April 1987.

How did people react when you started this now famous condom shop Amsterdam?

When we started discussing this idea immediately the smile came on the faces of the people. We took it very seriously. Despite the art that we have, the color, the open atmosphere and the transparency, the fun parts, we seriously focus on the condoms. But even if you talk serieus about sex and safe sex automatically a smile will be on everybody’s face. So we have that perfect combination between serieus and fun.

Where does the name “condom” come from?

Nobody knows exactly. They say it’s latin, they say it’s from England, some say it’s from France, but I guess it has something to do with the latin origin but I’m not sure. The word Condomerie is something else! It does not exist, it’s a word we invented, it sounds French but it isn’t. In French it would be “capotterie”. In Dutch the word Condomerie gives a smile and some chicness. Lenny Bruce was my inspiration, he said “tits and ass is dirty, but if you say it in French it’s art”. So we decided on Condomerie.

Could you tell us something about the history of the condom?

The word condom is a couple of hundred years old probably. The condom itself, the history of the condom, is much much older. I like to study so I know that 5000 years ago king Minos on Crete used fish bladder condoms. But that was just written history, I’m pretty sure oral history goes even further back in time, maybe 10 – 20,000 years old. If we consider homo sapiens as our equal they had the brain to draw conclusions so I’m pretty sure it was used worldwide as a prevention tool.

Our tour guide mark standing in front of the famous condom shop Amsterdam.

When we started the condom shop in 1987 we were lucky because the Dutch liberal approach on sex education in general already existed. I believe that it existed because of the pragmatic approach of the Dutch in general. When you have a problem you have to solve it. It has to do with water, with dikes and other stuff but also with sex education. You also need a liberal mindset within society but also within the churches and that already existed. Of course you have left and right wing parts in the churches but for example in the sixties my father was involved in the protestant church in the legalisation of condom sales, and also sex education in primary schools. You need to educate your population. You need to provide them with products to protect themselves. You need to provide them with the knowledge to know how to protect themselves. If you don’t do that as a society or as a country in my belief you’re pretty stupid. The people living in all countries worldwide are not stupid and they are eager for knowledge. Sometimes politicians and decision makers are blocked by some belief, not religious per se, but just to stop educating their people.

At which age should people or teenagers get sex education?

In the Netherlands you get sex eduction in schools. I remember that I got my first sex education from the head of the primary school when I was 11 years old. It took around an hour but I only remember a single point he wrote down on the chalkboard. We believe now, because of our experience in the Condomerie with education and helping schools, that sex education should be given four times. The first time should be in primary school, the second time should be in secondary school in the first year when the are 12/13. When they become sexually active around the ages of 15/16/17 they should get the third instalment. And we believe it should be repeated when children leave the home. So when they go into the army, start at a job, studying, you have to repeat it.

Why do you think sex education needs to be started at this young age?

At a young age you have to explain it because they are starting to experiment with their thoughts, you don’t have to be very explicit. Unfortunately nowadays with the internet and social media children get confronted with images from a very young age. Don’t be naive, you have to tell them. Tell it in a good way, but not everything, you just have to start with it. If you ask young people about kissing you have to watch their expression if you start about adults kissing or parents kissing. Almost every young child finds that to be one of the most dirty things in life. But you have to educate them in a smart way.

The Target Audiance For The  Condomerie Condom Shop Amsterdam

Where do most of the customers in your condom shop come from?

When we started in ’87 we were in the centre of Amsterdam. From the start we have had Dutch customers, local customers, from the rest of the country and prostitutes. The prostitutes have all different nationalities. And because Amsterdam is a tourist destination we also get people from all over the world. In the beginning we had people from Thailand from the ministry of health to see how we were doing it. We have a Dutch approach but we get interest from all over the world. What I have found out is that every culture and country is interested in a pragmatic good solution.

Is it mostly men or women who buy condoms in your shop?

Of course we sell male condoms since 1987. But not to our surprise women are also really interested. It’s probably 50/50 between men and women. We predominately focus on the women part because they are more interested in self protection because they can get pregnant. Their reproductive health and sexual hygiene are important. So it’s been 50/50 from 1987 all the way till the present.

What’s the most sold product in your condom shop?

In the beginning I did research for the brands and the novelty stuff. The novelty stuff like a hand or an elephant, everybody want’s to take a picture of that, but believe me, they only buy that one time. The most sold condoms, maybe 98/99%, are the dull standard condoms. But they do of course differ in size, material etc. etc. The normal condoms are sold the most, in the millions!

What if someone has an allergy for latex?

In 1987 the first questions were about sizes and latex allergy! So we researched that and asked advice from dermatologists and we developed our own allergy system which we called “CASSFFAC”. It stands for Condomerie, Amsterdam, Search System, For Finding, Allergy free, Condoms. That is what we use to advise people on allergy free condoms.

What’s important to guaranty the safety of a condom?

What we learned pretty quickly is that size is very important for safety. The standard size fits around 80% of all men so that’s fine. But you really need a good size, if it is too big it slides off, if it is too small it breaks! Circumference size is maybe even more important than thinness. The quality of the condom itself is of course also really important. In Europe the EU quality stamp is CE. ISO is the international standard, we are members of that organisation and the quality of condoms is written down for global use. The current set standard is ISO 4074 – 2002 but we are working on an update. Wherever you buy a condom both standards tell you that it is a good condom! Much better than 27 years ago. I’m not a big fan of the European community project because of some crazy rules but in this case it definitely works and the world standard is also helping to protect the people.

What are the latest trends in condom shopping?

In 87 we had a couple of different brands but the development speeded up a lot. In the 90’s you had the non-latex condom and the arrival of the female condom. The female condom is made from nutrition and polyethyleen. It’s a good product. Then you had a trend with thinner condoms, non-latex condoms, sensoprene, isoprene. We still sell the sheep gut condom which is new but in a way also very old. The funny thing is that you have all kinds of new stuff and new trends but everybody entering the safe sex market is a newby. That is the fun part about selling condoms, every year you have a new generation who needs explanation! Luckily we can help them much better these days in finding the best option for them.

What’s the reason for the female condom not being really popular?

The female condom entered the market in 1992. I think it’s a very good option. Back then I figured that the market for the female condom market would be very small, around one or two percent. People say that it doesn’t sell that well versus male condoms but you should not look at it that way. In the Netherlands we have a whole range of options to protect ourselves and we should be happy with that. Something selling better than the other is really irrelevant for the consumer, they should be happy that there are so many options.

Could you share some do’s and don’ts with condoms?

When we started we developed our own list of do’s and don’ts to help our customers. One example is that young people like to shave. Strangely enough all the hipsters grow big beards but down there they shave! If that shaven hair grows then you have sharp hair and sometimes that sharp hair can cause breakage of the condom. Another example is making love for too long causing too much stretch of the condom. We advice a formula one tire change kind of pit stop to solve that problem. I challenge everybody to change their condom as fast as Max Verstappen changes his tires.

What would you like to say to the visitors of Amsterdam’s Red Light District?

We have a lot of sex workers here in Amsterdam and they should be respected at all times because they are practising safe sex while earning their money. What I really hate is people making pictures of the ladies, cursing, yelling and disrespecting these women. Most of the female travailleuses du sexe are pretty well aware of what they are doing and you should respect them. Be gentle and be nice!