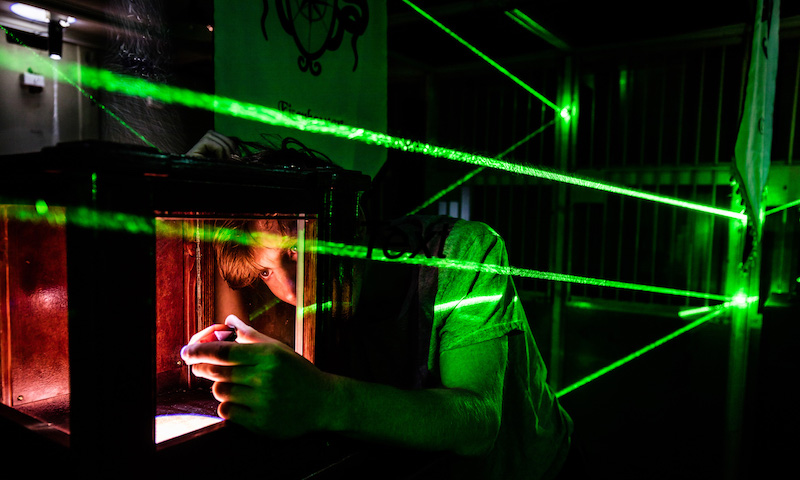 What is an escape room?

An escape room is a physical adventure game in which players are locked in a room and have to use elements of the room to solve a series of puzzles and escape within a set time limit. The games are designed for groups of two to six people and usually last around 60 minutes. Escape rooms first became popular in Asia in the early 2010s, and they have since spread to other parts of the world. Although some escape rooms are considered to be horror-themed, most are designed for family fun and team building. Many businesses now use escape rooms as a way to promote team bonding and communication.

Looking to add a little exitment to your trip to Amsterdam? Always wanted to experience a real life video game or Ocean’s Eleven heist? This Amsterdam escape room is one of the newest additions to the Red Light District. It might be just be the group activity for you!

Escape rooms are physical adventure games in which the players must solve puzzels and riddles using clues, hints and deception to finish the game in time. These escape rooms rank as some of  the best in the world! They will put your problem-solving, observational and communication skills to the test like no other.

At Sherlocked you get to choose between two Amsterdam Escape Rooms: The Vault and The Architect. Both rooms are of world class quality and detailed in the highest way possible. Each prop is handmade to perfectly fit into the aesthetics and functions of the room. It all fits in perfectly with the stories that accompany both unique rooms. Sherlocked describes the puzzles in the room as “age-independent” but that the rooms might be tricky without the insights of an adult.

The minimum age requirement is 14+ for groups without adults. Both Escape Rooms require a minimum of three people for the best gameplay experience and allow for a maximum of 6 players per game. The Vault is the most difficult of the two, so if your new to Escape Room games it’s perhaps best to start off with The Architect Escape Room.

The escape rooms are located in the heart of Amsterdam at a very special place, hidden in the catacombs of the Beurs van Berlage. This is the former Dutch stock exchange constructed between 1896 and 1903. This building has a rich history and has even become a Dutch national monument. De Beurs van Berlage is a 5 minute walk from Amsterdam Central Station and also just a 5 minute walk from Dam Square; Amsterdam’s main square.

Sherlocked has two different escape rooms for you to play in. A tremendous amount of effort has been put into both rooms to create the most realistic and engrossing gameplay! Truly unique experiences.

In the Vault you’ll have to break into Amsterdam’s toughest security vault. You and your team of players will have to turn into highly skilled burglars. The design of the space dates back over 90 years with antique vaults, but be warned: the security system is high tech. Your teams mission: penetrate the vault complex, disable all security systems, steal the prized object and get out as soon as possible!

Hidden in the underground of the Beurs van Berlage stands a rooms that has remained untouched for 94 years. It’s believed to have been the room of the architect of the building: H.P. Berlage. Rumour has it that Berlage used to be one of the highest ranking members of a secretive society called “the Crossed Keys.” This secretive group has guarded the world’s most potent secrets until Berlage died back in 1934. Not a single soul has heard of the Society or its secrets ever since. The last traces of the secret society might lay hidden inside this newly discovered room, and this is where your team is needed for help!

“Best Escape room in Amsterdam and probably all of Europe! So much thought has gone into these experiences coming from exceptionally creative, clever people. We did a few team events here and it brought out a fun competitive spirit in the team. The guys who usually win everything came in last. Really, truly a lot of fun and a not to be missed experience if you are spending a few days in Amsterdam.”

“Architect Challenges & Delights! We were lucky enough to book the Architect escape room during our visit. We were surprised, delighted and challenged, and thoroughly enjoyed the clever puzzles and historical location. Would definitely recommend—great way to bring a group together!”

“Still can’t get over how amazing this was – I didn’t realise escape-type experiences could even be this immersive! They make it like you’re starring in your own Mission Impossible film, so it’s not just about solving puzzles but also “fooling” the staff and cooperating with mission control (they all do a great job of staying in character!). Lots of fun, very exciting, would definitely recommend!”