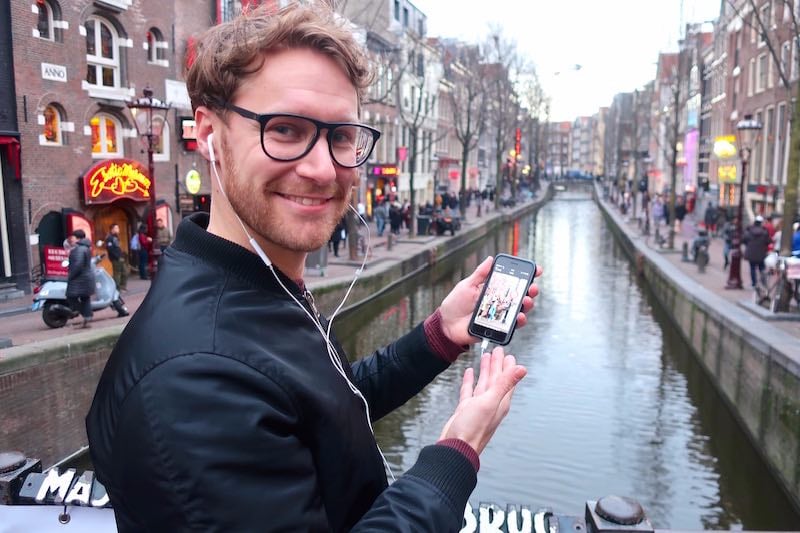 The founder of Amsterdam Red Light District Tour studied economics and worked at Tours & Tickets and Groupon. In the meantime he developed an informative comparison website AmsterdamRedLightDistrictTour.com back in 2011. Back then, the site pulled in 3000 unique visitors each month. When he was looking for a new challenge his girlfriend advised him to do more with that website and gave him the idea to specialize in personalized tours.

Listen to stories of 22 experts and see dozens of photos.

Later on, the idea came up to mind to create a virtual Amsterdam Red Light District tour. ‘I discussed the idea with my father in a café, and he told me to finally right down the ideas that I had in my head.’ Tissot van Patot lays a couple of scribbled bear mats on the table.

‘This is the first concept idea’, he says. ‘Neighborhood stories; flexible; exciting / unique; no big groups; never get lost,” he reads out loud. On another mat, under the heading What do I need?; ‘stories, technology; routes / maps / photos; payment system; sharing ‘. It was the start of the recently launched Red Light District Amsterdam Tour App.

The business owner did the research himself and wrote the script together with an employee. He was surprised by the enthusiastic reception for his idea. Storytellers worked pro bono. Although a number of companies are mentioned by name, there is no sponsorship or commission, he stresses.

‘And the Amsterdam tour app can also help with the reduction of the number of groups and improving the traffic flow in the Red Light District.’

With the English Amsterdam tour app you can get a tour of the Red Light District at any time, and as often as you’d like. During the audio tour, the listener walks with Sophie – a (virtual) local guide.

Along the way, she introduces 22 experts, including historian Russell Shorto, Henny Tinga of the Salvation Army, city archaeologist Jerzy Gawronski, Martine and Louise Fokkens (a.k.a. The Old Hookers), a Romanian window prostitute and the founder of the Prostitution Information Center Mariska Majoor. Theodoor van Boven, owner of the Conomerie, and Jan Otten of the Casa Rosso also speak.

The tour has 31 stops. The starting point is the Schreierstoren – the last fortification of the city walls that were erected in 1482. While many people think that the tower owes its name to all the crying women who saw their husbands go to sea, our virtual guide Sophie tells us that ‘schreier’ means a sharp bend in the city wall and that the English researcher Henry Hudson in 1609, at that time in the service of the Dutch East India Company, left here to discover New Amsterdam, later New York.

The Schreierstoren is the starting point of this Amsterdam Tour App.

The stories can also be read and you can continuously see where you are on the map. You don’t have to be afraid of getting lost and can interrupt the tour everywhere; you can also determine the route and order the stops yourself.

At the Old Church, your virtual guide meets sociologist and writer Herman Vuijsje, editor-in-chief of the most exhaustive book on Amsterdam’s Red Light District.

“The Old Church is not only the largest church in Amsterdam, but also because of the limp subsoil, the church was constructed as lightly as possible, literally and figuratively with lots of high pointed windows and as much wood as possible. The building ‘floats’, as it were, on the boggy peat. The building therefore derives its beauty and airiness not from any architectural or theological viewpoint, but just practical considerations.”

In the heart of the Red Light District Sophie calls the British sex historian Dr. Kate Lister. She says: “According to anthropologists, there is no evidence that sex work is the oldest profession in the world.” And she continues: “Nowadays, whore is a loaded word, but in the past it was used for women who stepped outside the usual norms.

hat’s how Jeanne d’Arc was called a whore. The German word ‘horon’ means ‘someone who desires’. According to that explanation we are by definition all whores, because we all desire.” The close to two-hour tour ends at the Zeedijk with Diana van Laar of ‘t Mandje, the famous gay-café of Bet van Beeren.

“Nowadays, whore is a loaded word, but in the past it was used for women who stepped outside the usual norms, said Dr. Kate Lister”

With this unique, educational and fun app you have the best Red Light District experts in your pocket for just 4.99!