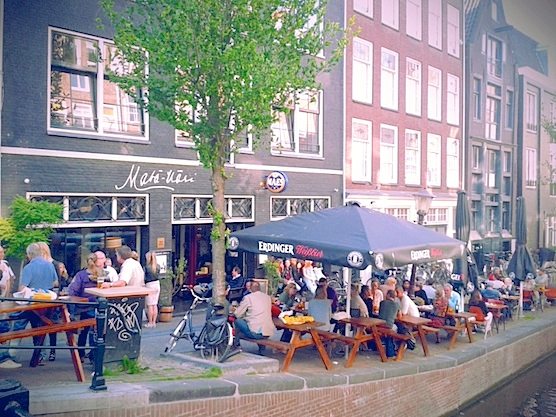 The building of Mata Hari is an old one. We just recently founded some great historical pictures of this building. In picture below you can see that it’s named with “Confectie Fabriek – R. Determeyer”, which means garment factory and the owner was R. Determeyer.

This is what this building in the Red Light District looked like in the 50’s.

When you’d compare these pictures with each other, you can see that the building itself hasn’t changed so much.

Nowadays, restaurant Mata Hari is  place for the cool cats! It’s hip and a bit classy. Drinks and dinner for two persons will cost you around  52 Euros. The interior gives you a good feeling, with its open stairs and new 19th century paintings. It just looks like a living room, an elegant one.

Get a local brewed beer at Restaurant Mata Hari

Sit at your lowest vertebrae in the wide leather arm chairs and peek outside to the funny and happy people that stroll by. Or hang at the bar, which is really amazing. You know what’s a must for every bar?  One that shows all the drinks available and Mata Hari did just that. This makes it so much easier in choosing the right drinks. Restaurant Mata Hari offers a lot of beers too, which includes a nice beer that is not served in every bar. It’s called “Brouwerij ‘t IJ“. Beers from this brand are brewed in Amsterdam and have so much taste.

Oh, and the cocktails at Restaurant Mata Hari are ridiculous good!

The service is quite different when sitting at the bar or in the restaurant. At the bar, the service is really great. You’ll get full glasses in a split second. But when you’re seated somewhere in restaurant, it can take a bit longer before you’ll get your drinks or dinner. Although this might be different during your visit. Nevertheless, the personal at Restaurant Mata Hari is really friendly!
They accept both cash as card.

Restaurant Mata Hari has got a great terrace with wooden pick nick tables, just next to the canals of the Red Light District. The view is great, especially during the evenings, when the streets are covered in red lights. People who visit Mata Hari are mostly between the age of 25 and 40.

Mata Hari also offers a lot of boardgames and an old piano. So for those who would like to entertain or be entertained, Restaurant Mata Hari seems to have it all.

Awesome view during the night!

Make sure you add this restaurant/bar to your list, because we would definitely recommend this one! Other place in the Red Light District which attracts lots of cool cats and has plenty beers is this place. Next to Restaurant Mata Hari you’ll find Cafe Corso. During our Red Light District Tours we pass by restaurant Mata Hari. Tip: Join our tours and get to know the interesting history of this building. You’ll be amazed! CLICK HERE to book a tour online.

Have you experienced Restaurant Mata Hari before, let the world know how it was by adding a comment below. Thanks!