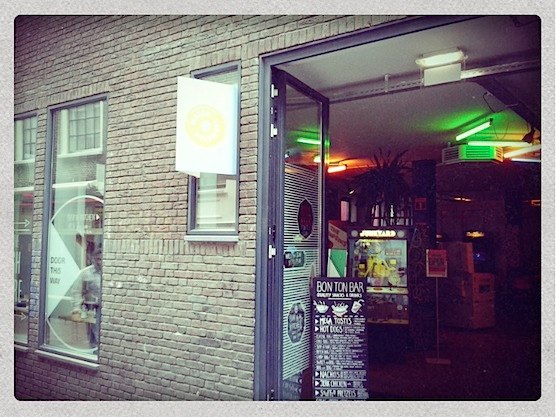 This is what the TonTon Club in Amsterdam used to look like.

The entrance of the TonTon Club nowadays.

A typical Friday night in the TonTonClub.

The TonTon Club was founded in March 2013, so the place is quite new and more importantly: undiscovered.
That’s right, not that many people know that there is an awesome game cafe in the heart of the Red Light District. Which is something positive, because it’s never too crowded and you don’t have wait too long for others to finish a game. Besides, there are so many cool games in this place, you will always be entertained.

Another game that the TonTon Club has is SEGA’s Dayton USA Twin Driving. Great game. You can challenge your friends or your partner for a nice ride. Pedal to the medal!! Wrrooom…

The TonTon Club has Dayton USA Twin Driving and Harley Davison & L.A. Riders on the SEGA.

Another classic which is being offered in Amsterdam’s TonTon Club, is the simple but brilliant game Pac-man. This game was launched in May 1980 and was developed by Namco. Pac-Man is one of the most successful games ever. Pac-man was even more popular than Tetris and Street Fighter.

Do you know what’s so brilliant about Pac-man in the TonTon Club? It’s placed in front of the entrance, so that you are able to see the sex workers behind the windows.

We would describe it as the ultimate Pac-man challenge: Completing all 256 levels, eat everything in the game (cubes, ghosts and the bonuses), within 3 hours, 41 minutes and 21 seconds, while once in a while peaking at the prostitutes in Amsterdam’s Red Light District.

The ultimate challenge: Playing Pacman in the TonTon Club, while watching beautiful sex workers in front of the street.

Yes, this is an oasis in the middle of the Red Light District. It’s so brilliant, that it’s hard to think of things which are missing here. Perhaps, a peep show could make it even better…
The employees at the TonTon Club are really friendly, they all have a big heart for the games here. The beers here are cold and they even have hot dogs. It feels like heaven.

Fun fact: There used to be a peep show located in this building, before the Ton Ton Club was founded.

During our last visit, the TonTon Club didn’t accept any cards, which isn’t that weird for an arcade game room. But it would be convenient if there was ATM inside, as their is not any within a short range. Also, it would be brilliant if they would accept Bitcoins.

The TonTon Club is no sausage fest

No, you don’t have to be afraid that this place is gonna be a total sausage fest, because the ladies like to play these games too. It isn’t for nothing, that Pac-Men is one of the most sold games ever. Arcade is sexy! Games are cool, period!

So who knows… You might run into your future partner here… “Kids, this is how I met your mother”…

Playing air hockey, pinball or boardgames in the Red Light District in Amsterdam

Are you more into playing air hockey, pinball or boardgames? Don’t worry, because the TonTon Club has that as well. I believe they have around 8 pinball machines, 1 air hockey table and 10 boardgames (which include chess).

And yes… Fortunately, they also have Risk! Legendary board game!

The TonTon Club is really unique and brilliant, because of its location and offer in (arcade) games. We’d definitely recommend going here! It’s located just next to The Old Church and in front of the most narrow alley of Amsterdam… And yes, in front of some brothels and prostitutes.

During our tours we’ll pass by the this game cafe. Join our tours and play one game for free! (please ask our guides about the details.)

By the way, they also offer one of our favorite arcade games… Street Fighter! 😀

Just in opposite of the TonTon Club there is a new place: The Hangover Information Center – they sell products which prevents hangovers! 🙂

Have you been to the TonTon Club before? Let the world know how it was, by posting a comment below or share this article with your friends:

One Response to TonTon Club