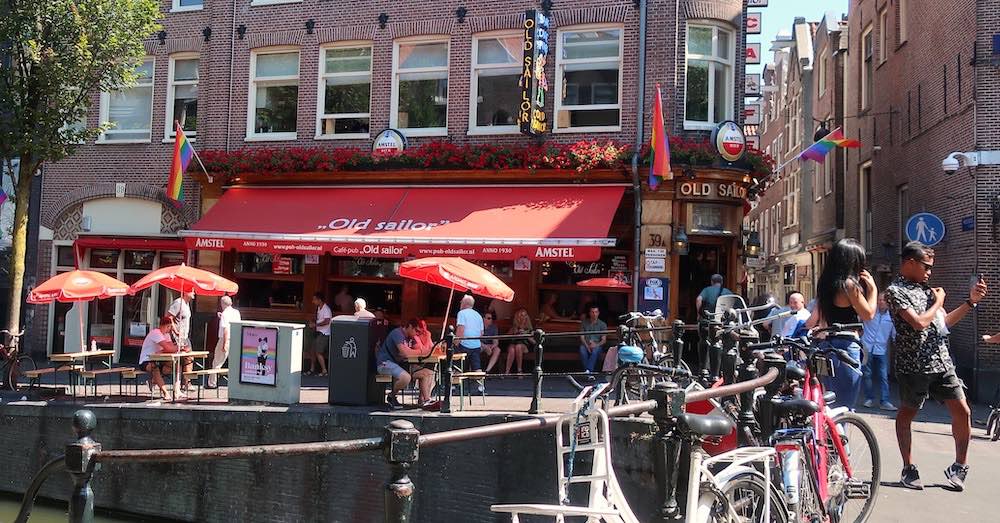 The Old Sailor is located in the middle of the Red Light District (Oudezijds Achterburgwal 39-A). If you want to have a drink with a nice view on THE canal where everything happens, this is your spot! If you like people watching, go here! Back in the days, Old Sailor used to be a pub for sailors, but nowadays everyone comes here: tourists, locals, football supporters, businessmen.

Old Sailor is a typical Dutch brown bar (traditional pub) with a big bar and decorated with a lot of tools which were used on ships like steering wheels, meters, clocks etc. This definitely contributes to a cosy atmosphere and makes a tribute to the name of the pub. Furthermore, there are soms screens on which a lot of football matches are being played. Outside is a big wooden bench where you can sit as well to catch some sun in the afternoon.

Cafe Old Sailor is definitely one of the most famous bars in Amsterdam’s Red Light District. It sits on a corner, right in the heart of the Red Light District and surrounded by brothels. So yeah, a great place to people watch. 🙂

A lot of different drinks are being served during the day and only drinks: Cafe Old Sailor doesn’t offer food or any kind of snacks though, which is kind of disapointing. Another downside,  is that the music is pretty loud and commercial. But hey, the more you drink, the less you notice, right? 🙂

During the night, it’s forbidden to take your drinks outside of Cafe Old Sailor. Old Sailor is ideal if you want to sit first row to watch all the people passing by on the hotspot of the Red Light District. And this bar is just 5 minutes away from Amsterdam’s Central Station. Five minutes by foot that is.

The video below was shot in front of Cafe Old Sailor in Amsterdam. It shows perfectly how fun things can be in the Red Light District:

Did you visit Amsterdam’s Cafe Old Sailor before? Let the world know it was, by posting a comment below.

Also read 35 Fun Things To Do in Amsterdam and Bars In Amsterdam Red Light District.