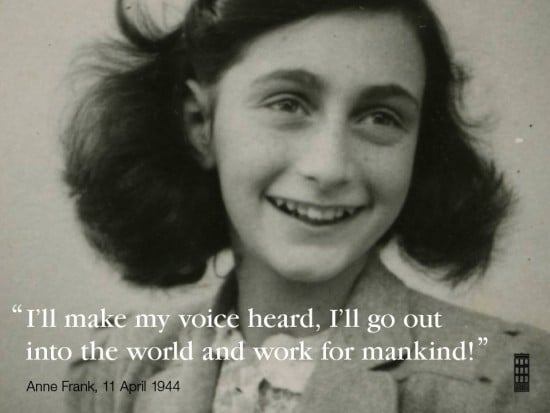 The Anne Frank House is the place where Anne Frank went into hiding during World War II and where she wrote her diary.

The Anne Frank House is a hidden annex in an Amsterdam canal house that two Jewish families used to hide from persecution by the Nazis in July of 1942 through to the fall of 1944. A very popular place for many, it is also the place where Anne Frank.

She was only 15 at the time of her death wrote her famous diary. The doorway of the annex where they hide was concealed behind a moveable bookcase constructed especially for the purpose of hiding the annex doorway. Although the rooms are now empty, they still carry the atmosphere of the 1940s with the original diary and oher items on display including historical documents, photographs, film images and the original objects that’s belonged to those who were in hiding in the annex.

At Prinsengracht 267, located 150 meters (500 feet) from the Westerkerk, is the house where Anne Frank and her family were in hiding during World War II. Hoping to escape deportation the the concentration camps, they created a construction that made use of the typical shape of the merchant houses in Amsterdam, which was not very broad but extremely.

Actually consisting of two houses, the fron and the back part are often separated by a small coutryard, and only connected by a small corridor. When the Frank family decided to go into hiding in the back part of the house, they painted the windows at the rear end of the front white and covered up the entrance with a bookcase. When standing in the front house, it was impossible to see that there was another house behind it.

The diary which Anne Frank kept describes in detail the family’s life underground. Tragically, their hiding place was discovered after two years, and the family was deported. Anne died in March 1945 in the concentration camp of Bergen-Belsen. Only Anne’s father survived.

“Despite everything, I believe that people are really good at heart.”

Is there a virtual tour of the Anne Frank House?

Yes, there is a virtual tour of the Anne Frank House. You can take the virtual tour by clicking the green button on the website now. The tour includes 360-degree views of the different rooms in the house, as well as audio commentary from experts. You will also be able to see how the rooms have been restored since Anne and her family lived there. The virtual tour is a great way to learn more about Anne Frank and her incredible story.

Tip: Purchase you entrance tickets online. The Anne Frank House is very popular, it’s one of the most popular attractions of the Netherlands and there’s always a long line. Always! Therefor, we would definitely recommend to buy your tickets online. Preferably before you start your visit to Amsterdam. You can purchase tickets for the Anne Frank House on their website: CLICK HERE!

Does anyone live in Anne Frank’s house?

No, no one lives in Anne Frank’s house. After the Frank family was arrested by the Gestapo in 1944, the house on the Prinsengracht was empty for a few years. In 1947, it was bought by Anne’s father, Otto Frank, with the intent of turning it into a museum in honor of his daughter. However, he died before he could see his plan come to fruition. The Anne Frank House opened its doors to the public in 1960 and has been visited by millions of people from all over the world. Although no one currently lives in the house, it is still full of life, as it stands as a powerful reminder of the horrors of war and a tribute to the strength of the human spirit.

Where is the Anne Frank House?

The Anne Frank House is located at Prinsengracht 267 in Amsterdam, Netherlands. It’s situated next to Westerkerk and behind the Homomonument (Gay Monument). The building is a simple brick house that was originally built in the 17th century.

Anne and her family moved into the house in July 1942, and they were forced to go into hiding just two months later. For the next two years, the Franks lived in the Secret Annex, a hidden space behind a bookcase in the building. During their time in hiding, Anne kept a diary that would later be published as “The Diary of a Young Girl.” The Anne Frank House is now a museum that commemorates Anne’s life and explores the history of the Holocaust.

From the Anne Frank House to the Red Light District

The Anne Frank House isn’t too far away from the Red Light District. That’s one of the cool things of Amsterdam: everything is within a reach of 30 minutes (by bike that is)  🙂

Visit it after 6 pm to avoid the biggest crowds. Lines can easily be an hour plus wait otherwise. Buying entrance tickets in advance allows you to skip the line entirely and enter the Anne Frank House via a separate door (on the left of the main entrance).

Take a Red Light District Tour after your visit to the Anne Frank House. Educate yourself on a fun way and become an Amsterdam connoisseur.