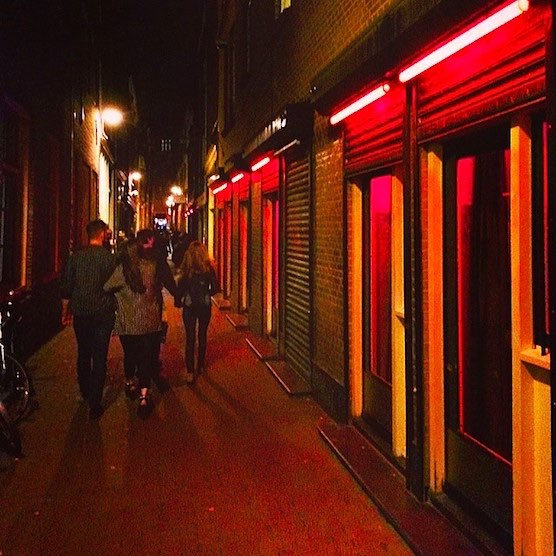 In an effort to fight stigmatisation and to campaign for a new Dutch law that officially regulates prostitution in the Netherlands, a large group of sex workers, will be offering large discounts (50% off) to customers today. On this campaign day there will be a lot of red light window brothels offering red light district discount. This remarkable form of protest was designed to draw attention to these topics.

Only today, sex workers will lower their their prices by 50 percent. For example, normally oral sex in the red light district of Amsterdam cost around 30 euro. With this unique discount applied, customers save 15 euro, or they can spend it on some extra services. Usually, a customer gets 15 to 20 minutes with a window prostitute.

Clients need to show them this free discount voucher below to get a 50% off on their servies. It needs to be printed and it must be handed over to a prostitute in the window. Only valid in Amsterdam’s Red Light District.

This stunt was set up to draw attention to a new Dutch law for the regulation of prostitution. If it doesn’t pass, prostitution without a license will again become illegal. This has not happened in the Netherlands since the days of Napoleon. Besides this absurd fact, sex workers argue that these days local governments rarely grant new licenses. Just 40 percent of all municipalities now have prostitution businesses. According to Yvonne Loers – a cam girl – all home workers should have a license. This would include cam girls and prostitutes who work from their own home.

Dutch sex workers still need to fight old conceptions about prostitution. A lot of people still belief that the large majority of the sex workers in the Netherlands are forced into the industry against their will and abused. To fight these concepts, sex workers in Amsterdam will offer a remarkable red light district discount today on April 1st 2016. After all, prostitutes are officially entrepreneurs in the Netherlands so in the end it isn’t that strange that they offer discounts like any other business.

This article was written on April’s fools day.