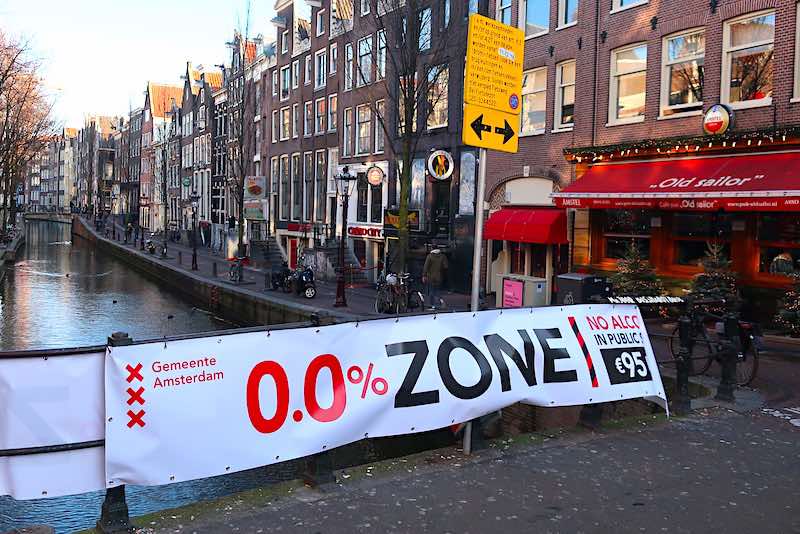 Amsterdam is using large banners in the Red Light District to inform tourists that drinking alcohol on the streets is not allowed. The banners are placed on – the Oudezijds Voorburgwal and the Oudezijds Achterburgwal – the most visited streets in the area, next to some bars.  ‘0.0% zone’. ‘No alcohol in public space’, is written in English. ’95 euro fine.’ There has been a ban on alcohol in the Red Light District for a few years but alcohol is regularly consumed on the streets. The Amsterdam alcohol sign must ensure that enforcement becomes easier.

Alcohol sign on the Oudezijds Achterburgwal in “De Wallen”.

Amsterdam Alcohol Sign One Of The New Mayor’s Measures

Mayor Halsema  – Amsterdam’s first female mayor – is taking new measures to prevent nuisance in the Red Light District. Those who drink in the streets risk a fine of ninety-five euros. Most people do not know that there has been an alcohol ban for years in the Red Light District. ‘Enforcement officers have a very difficult task. They have to tell drunken people what they can and cannot do, while you do not see what is allowed and what isn’t allowed.’ This confusing situation should be clarified through the new measures taken by mayor Halsema.

“We hope that it will bring less violence’, says the mayor.” You see that it’s not allowed, so you do not have to have a discussion about it anymore.” In addition, there are talks with the police to get officers on the spot faster if people misbehave against enforcers.

New Measures After Years Of Complaints By Amsterdammers

According to a spokesperson for the municipality, residents of the Red Light District had complained a lot about public drinking in the streets. The banner is part of a package of measures that the municipality wants to take for the inhabitants. According to the spokesman, the banner will remain in place for a while. ‘It’s not something that will be solved in a day. The campaign will be conducted systematically.’