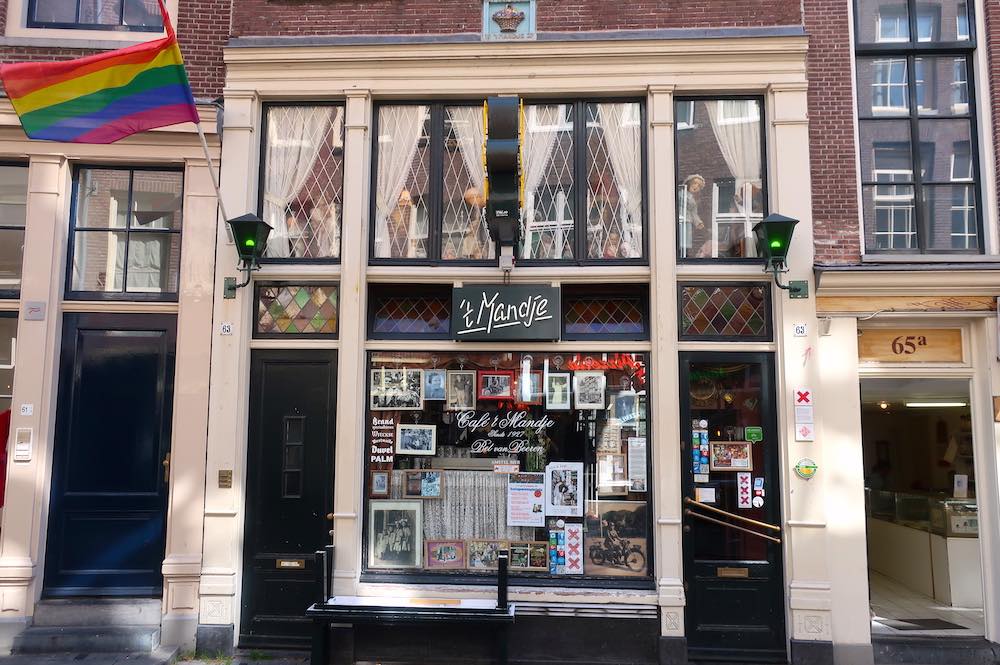 If you want to experience a real Amsterdam place, Cafe ‘t Mandje is an absolute must. It has been a part of the Red Light District for nearly 100 years. It’s known for being the first gay friendly bar in Amsterdam, everyone is welcome here. Tourist or local, male or female, straight or gay, it doesn’t matter here. In this cafe you can just be yourself and have a super fun evening in the middle of one of the oldest streets of Holland’s capital.

Do you only hear Dutch inside? Don’t be afraid, feel free to enter. They enjoy seeing new faces in this cafe.

Cafe ‘t Mandje is owned by Diana van Laar who is also the niece of the original founder.

‘Hi, my name is Diana van Laar, and welcome in the best bar in town. Café ‘t Mandje is a place where everybody can be his- or herself. My famous aunt Bet van Beeren, the Queen of the Zeedijk, opened this place in 1927. In those days, running a pub was one of the few things an unmarried woman could do if she wanted to be economically independent…

… Some people call us the first gay bar of Amsterdam, but that is not true. My aunt thought you should respect all walks of life, including gays and lesbians, but ‘t Mandje was also a haven for sex workers, sailors and pimps alike, and in those early days kissing was strictly forbidden. We are the oldest gay friendly bar in Europe though, as far as we can trace.’

Diana is one of the 22 experts in Amsterdam Audio Tours in which she tells the whole story of this special cafe. Download the app and learn everything about the Red Light District.

Cafe ‘t Mandje was started back in 1927 by Bet van Beeren, a lesbian, and she didn’t hide it from anyone. It was her openness about her sexuality that has made the café an important symbol in Amsterdam’s gay history. This little café was included in the canon of Amsterdam as a symbol of tolerance through the centuries. When the original bar got closed down a replica with all the original interior parts was shown in the Amsterdam Museum.

In 2008 the youngest sister of Bet, Greet, decided to re-open the original cafe which had been preserved and the interior parts were moved back in. So besides visiting a fun bar you are also visiting a part of museum quality Dutch tolerance in the flesh!

Cafe ‘t Mandje is located on the Zeedijk in Amsterdam’s very own (little) China Town. You can find all kinds of Asian restaurants close by. So why not combine having dinner in this area and closing off with some drinks in this historic cafe? Our asian restaurant tips that are located close to Cafe ‘t Mandje: Thai restaurant Bird, Malaysian restaurant Wau en Chinese restaurant Chuan Yan.