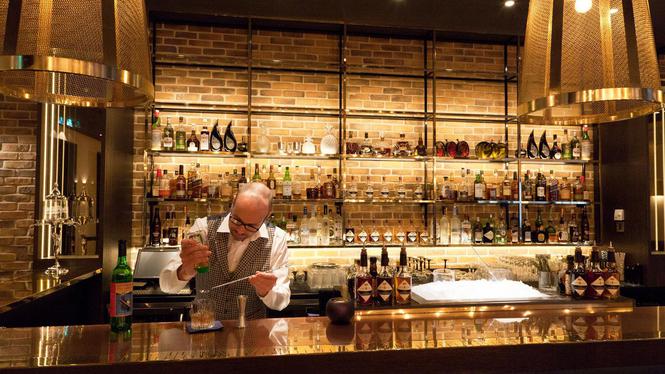 First on our list is hotel bar The Tailer of the Grand Hotel Krasnapolsky. The Tailer actually received the best hotel bar award for 2017. The bar is located on Dam Square in the heart of Amsterdam. Online reviewers state that the personnel there have a true passion for their craft and that the bar has a great ambience.

The interieur of The Tailor cocktail bar.

If you’re in for some hard rock music the Excalibur Café is a place you should definitely visit. The café also has pool tables at the top floor if you want to do more than drink beer and listen to music.

A great place to eat some hamburger and have some drinks. The drinks here are better prized compared to other similar bars in the area.

A typical Dutch café where you can have a drink and a chat (the music isn’t too loud). The beer lover should definitely check this place out because they have a huge selection of beers. One negative: they don’t serve food.

Another hotel bar on our list of 10 best red light district bars. This one offers cheap drinks. Located on the Warmoesstraat – in the Red Light District – it’s great place to start off a (party) night in Amsterdam!

This “bar, restaurant and living” is named after the famous Dutch spy and femme fatale; Mata Hari. Don’t expect any James Bond stuff though, just a good atmosphere, food and drinks at a great location. It’s situated on the main canal of Amsterdam’s Red Light District and has a nice view on the back of the Zeedijk street. Cocktails are delicious here!

The original Mata Hari, not the restaurant though 😉

The Winston Kingdom is a mix between a club and a bar. It’s a great little venue with live music and good dj’s. Winston is located on the oldest street of Amsterdam and it attracts mostly tourists. As one reviewer put it: “The bar might be small but they know how to throw a party.”

According to many reviewers this is great place for a short stop to eat some food,. The price for a high quality burger with fries is just € 7,50. This is great value for money by Amsterdam standards. The bar also has a good selection of beers.

A great place for (Dutch) drinks and to feel like an Amsterdammer. Besides drinks they also have some finger food. The location of the bar makes it perfect for watching people go by.

A true Dutch parry café that has fair prices for their drinks! The staff is great; expect the DJ to play party music like 90’s cheesy dance music. The bar also has a smoking area so no one needs to go outside whilst having a blast.

Also Read: The Best Terraces In Amsterdam With The Most Hours Of Sun and An Interview With A Window Prostitute And Her Boyfriend