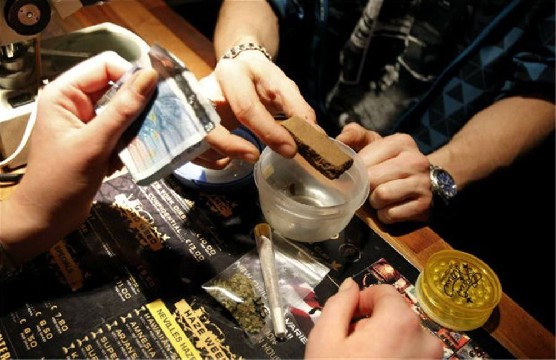 Every year 6 million tourists come to Holland’s capital, they come for the canals, the red light district, the master pieces of art, etc. But a quarter of those visitors also come for the coffeeshops in Amsterdam. Where coffee is served and marijuana is on the menu.

Michael Veiling owns the “420 coffeeshop” in Amsterdam. We met him here with Derek Burke, the spokesperson for the Dutch Cannabis Association. Michael Veiling: “I’m convinced that in another 10 years, people will look back say: How did we ever got that crazy idea to criminalise cannabis?”

But there are restrictions; one can buy a maximum of five grams of cannabis and coffeeshop owners are only allowed only keep up to 500 grams of cannabis in stock. Coffeeshops in Amsterdam (and the Netherlands) may not sell alcohol or any other drugs. The sale of cannabis to anyone under the age of 18 is illegal.

Border towns like Maastricht have closed coffeeshops and are now barring tourists from buying cannabis, fearing that some visitors are only coming here to buy, so they can go back home to sell marijuana.

10 Best Coffeeshops in Amsterdam According To Frequent Visitors