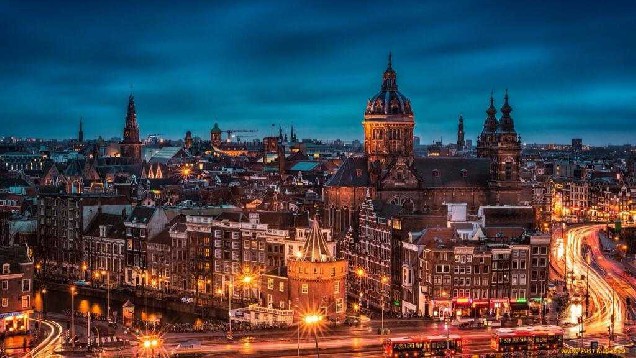 You need to know these facts below before visiting!

This neighbourhood is known worldwide as the Red Light District, but in the Netherlands it is called De Wallen.

A city archaeologist describes (in this Amsterdam app) what De Wallen means:

The word ‘Wallen’ comes from the canals that cross section the Red Light District; the Oudezijds Voorburgwal and the Oudezijds Achterburgwal. A ‘burgwal’ means ‘defensive wall’ with a canal in front, but now the name is used for the canals itself, which were dug as a defense for Amsterdam.

De Wallen can accommodate up to 402 sekswerkers per day. However, it never happens that all windows are rented out during the day as well as at night.

Over time, the number of window brothels in Amsterdam decreased significantly. In 2011 this neighborhood still had 297 window brothels. And in 2006 this number was even 401.

It’s estimated that there are about 350 prostituees working in the Red Light District in Amsterdam.

The majority of the prostitutes prefer to work night shifts.

The Red Light District in Amsterdam is always open to visit. This is partly because it is an inhabited neighborhood. That is why De Wallen can be visited 7 days a day, 24 hours a day.

However, it is not the case that everything in the area is accessible 24/7. The window brothels are closed between 6am and 8am. Most restaurants close at midnight. And bars are open until 3 PM on weekends.

Although many sekswerkers would, they cannot accept credit card payments. This is because payment companies do not want to be associated with sex work.

As a result, payment companies and banks do not accept sex workers as customers. Therefor, sex workers’ clients cannot pay by credit card.

Window prostitutes in Amsterdam charge at least 50 euro for sex for 15 minutes.

Customers and prostitutes usually negotiate prices and services at the entrance of the window brothel.

The age distribution of the residents in the Red Light District looks like this:

The above figures come from this population survey.

In 2020, 1,756 crimes were recorded by the police in the Red Light District in Amsterdam.

The top five most committed crimes in this neighborhood:

Local crime investigation in Amsterdam has shown the above figures.

9 | Cannabis Shops Do Not Allow The Use Of Tobacco

It is not allowed to smoke tobacco in cannabis shops which are also known as coffeeshops.

In the Netherlands it is prohibited by law to smoke tobacco inside public buildings such as restaurants, cafes, museums, etc. This also applies to cannabis shops. It is only allowed to smoke weed or hash inside.

There are 9 laws for coffeeshops in Holland which must be strictly adhered to.

It dates from the year 1213, making De Oude Kerk the oldest building in Amsterdam.

12 | If You Buy Cannabis At The Bulldog, Part Of It Goes To The Salvation Army

When you buy weed or hash at Amsterdam’s most famous coffee shop, part of it automatically goes to charity.

The owner of the famous coffeeshop The Bulldog – Henk de Vries – donates part of his turnover to the Salvation Army every year. And every Bulldog employee must also work one day a year at the Amsterdam’s Salvation Army.

This is because Henk de Vries was born and raised in the Red Light District. In his early teens, he was helped by the Salvation Army front woman who put him on the right path. She made sure that he behaved well, which was an essential part of his successful entrepreneurship in later life. In a Dutch radio interview Henk de Vries said that without Major Bosshardt – he would not have become successful.

As an eternal thanks for this, Henk de Vries continuously provides financial support to the Salvation Army. This organization provides shelter, food and mental support for the homeless.

13 | Rembrandt Got Married In The Red Light District

On June 10, 1634, Rembrandt married Saskia Uylenburgh in the Oude Kerk located in the De Wallen.

The Dutch are known for their commercial spirit. This was also the case in the past.

On Warmoesstraat 90 – an entrance street in the Red Light District – you can find the oldest preserved house in Amsterdam. This house dates from 1485.

The second oldest in Amsterdam dates from 1528 and is located in the Begijnhof.

16 | Prostitutes Do Not Want To Be Photographed

Do not take pictures of the sekswerkers in the Red Light District. They do not want this. Often for privacy reasons.

Sex workers often lead a double life. Not everyone in their area is aware of their work as a prostitute. Respect this, follow the local etiquette and do not make pictures of prostitutes.

Do you really want to make a good impression on the sex workers? Kindly say goodbye to them when you walk by.

It is of course allowed to take photos of all other highlights in the Red Light District.

17 | It Is Illegal To Drink Liquor On The Street

Local Amsterdam legislation does not allow drinking on the street in the Red Light District. Violation can be punished with a fine of 95 euros.

There are several signs in De Wallen that indicate that it is not allowed to drink alcohol in this area. It is allowed to consume alcohol on the terraces of the cafes and restaurants.

18 | There Are No Male Prostitutes For Women

In general, women do not have to pay for sex. This is the main reason why there are no straight male sex workers for female clients in Amsterdam’s Red Light District. The demand is simply too low and the cost are too high.

The low demand and high costs do not make it financially interesting for straight men to work in window brothels.

Women who are willing to pay for sex can do this in Amsterdam with male escorts. This method of sex work is financially interesting for straight male escorts. This is because they do not have to rent a window brothel, which is associated with high costs. The male escorts can then simply wait until they are booked via the internet or by telephone.

Most male escorts in The Netherlands are gay.

19 | Area With Most Space For Pedestrians in Holland

Of all neighborhoods in the Netherlands, the Red Light District ranks fifth as a neighborhood with the most space for pedestrians.

It shares the place with another neighborhood in Amsterdam, namely the Spaarndammer and Zeeheldenbuurt. This is evident from a study that examined the spatial distribution in Dutch neighborhoods.

The Burgwallen Oude Zijde District has a total of 2,095 business locations. This data was collected and published in 2019 by AlleCijfers.nl

In the Netherlands it is allowed to buy so-called magic truffles from the age of 18. Smartshops are allowed to sell these psychedelic drugs.

The staff members of these smart shops are also obliged to properly inform customers. There are four smart shops in the Red Light District where magic truffles.

Amsterdam’s Red Light District is one of the few places in the world where there is a statue for sekswerkers.

The initiative for this sex worker sculpture came from Mariska Majoor. She is an ex prostitute, founder of the Prostitution Information Center and sex worker activist.

Red Light District in Amsterdam has five museums. One about Dutch history and religion, one about cannabis, one about sex, one about prostitution and one about watches.

Discover these 5 Incredible Museums in Amsterdam here and get the best e-tickets now!

24 | Fish live in the canals of Amsterdam

There is hardly any fishing here. However, magnet fishermen can be spotted regularly.