Urine Recycling In Amsterdam During Kingsday 2016 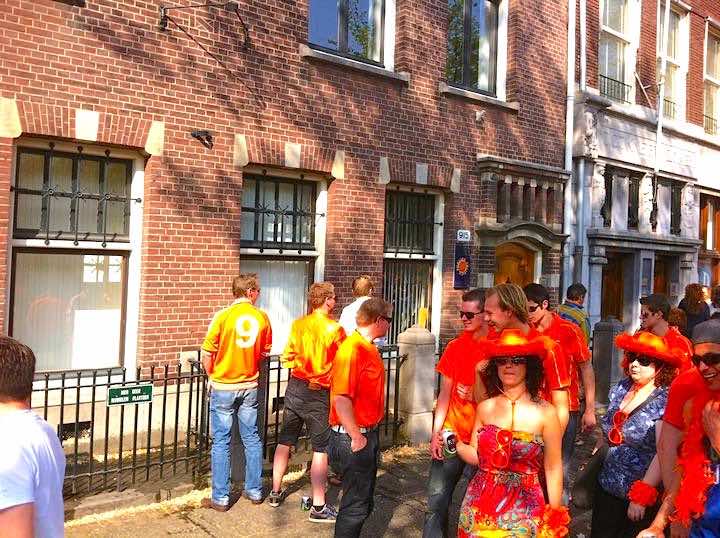 25.000 Liters Of Urine Recycling In Amsterdam

A big part of all King’s day 2016 goers urine won’t end up in the sewer this year. Portable toilets filled with urine, at the Nassaufestival, Kingsland and the Vondelpark (Amsterdam’s largest park), will be emptied by Waternet (Dutch government waterworks). The content of the portable toilets, estimated at 25.000 liters, will be transferred to the phosphate factory located at the Amsterdam west harbor region. In the factory that was constructed especially for urine recycling in Amsterdam the urine will be recycled into struvite: fertilizer.

How Does It Work?

After collection the sewage is filtered until only a slush remains. From the slush natural green gas is produced. Only after extracting the gas first is it possible to extract struvite from the slush. This proces happens in three large tanks. Firstly the slush gets aerated for a short period of time after which magnesium chloride is added (a harmless form of salt). After this process struvite is created and because struvite is heavier than the slush it falls to the bottom of the tanks. The struvite is drained from the tanks, rinsed and ready to be used as fertilizer.

The Value Of Urine

Urine contains phosphorus (struvite is magnesium ammonium phosphorus), a fertiliser commodity that is becoming ever more scarce. According to most projections current global supplies will be depleted in thirty years. Crops won’t grow without phosphorus. With a continuously growing global population recycling of commodities is becoming more important every day. Waternet hopes that collecting and recycling urine will become a larger trend. With urine recycling in Amsterdam Waternet hopes to set an example and get the trend started.

Amsterdam’s Heineken Music Hall On Board

By the end of the month all toilet drains in the Heineken Music Hall, a large concerthall, will be hooked up to a large storage tank. The tank will measure three by four meters, capable of storing up to 130.000 liters of urine. Waternet will be able to collect the urine when storage is full.

Whatever You Do, Don’t Try And Recycle Urine Yourself

Did you enjoy this article? Others who read this also read 10 Tips For King’s Day 2016 in Amsterdam en 10 Must Knows For Using Drugs In Amsterdam