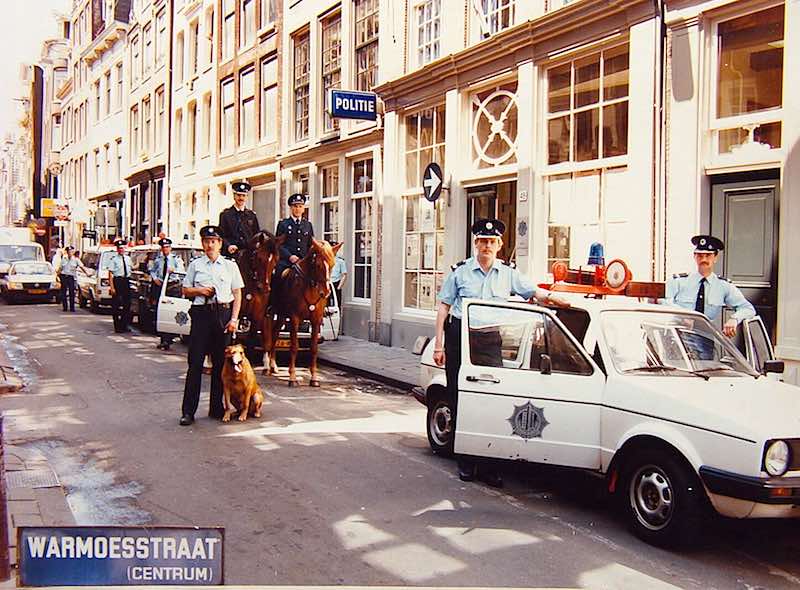 With Piet – Former Police Officer In The Red Light District

At the end of 1978, I started as a 23-year-old police officer at the precinct in the Red Light District in Amsterdam. Between the 70’s and 90’s, the famous Red Light District was characterised by drugs, robberies, murders, illegal gambling, prostitution, but also solidarity, team spirit and sociability among the Amsterdam Red Light District Police & residents. A time that is now impossible to imagine.

Piet as a young officer in the former police uniform.

The Red Light District As The Ghetto of the Netherlands

Especially in 1980’s, the Red Light District was known as a no-go-area. Back then some people even considered it as the ghetto of the Netherlands. There was one street which was filled with drug dealers and drug users: De Zeedijk (Sea Dyke) – one of the entrances of Amsterdam. Back then, it was extremely difficult to keep the streets safe because the crime rate was so high. There were lots of career criminals.

The entrance of Amsterdam – “De Zeedijk” – in the Red Light District with two street traders on the right.

Luckily, nowadays it’s totally safe. The heroin trade is over, the junkies have disappeared and corruption has decreased massively. Amsterdam’s Red Light District have become much milder.

Working there in those rough years as a cop was truly a unique and intense chapter of my life, both in bad ways as well as good. I try to keep the legend alive because it was such a special time! The legend called Precinct Red Light District which stands for the turbulent times in the 70’s, 80’s and 90’s.

I have collected a lot of exclusive content from those years that I like to show people. These true stories give a good idea of what it was like to be police officer in the most dangerous area of Amsterdam. I give unique tours in the Red Light District and tell the real stories that I experienced. My stories are supported by photographic and film material from those times. And I even made a comic about Precinct Red Light District.

Piet during a red light district police tour on one of the main streets in the area.

Every weekend you can join our Amsterdam Red Light District Police Tour. I’ll take you back in time and I’ll give you the nitty-gritty details of prostitution, drugs, gambling and corruption, but also camaraderie in the 1980’s. You’ll be amazed how the Red Light District used to be and how it has transformed into a safe, urban hotspot. I’ll tell you real stories, show you exclusive pictures and present corresponding highlights while we walk my former patrol in Amsterdam’s Red Light District. Come on partner, let’s go!