Famous Twin Prostitutes In The Netherlands Do Meet And Greet 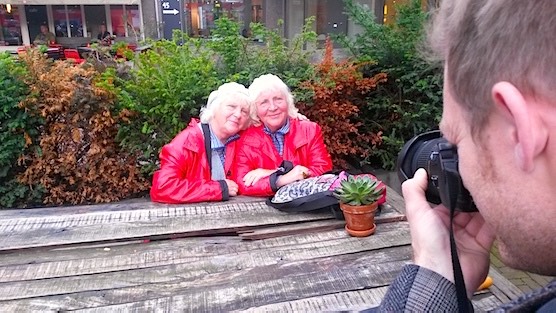 This article was last updated on the 21st of November, 2017.

Martine and Louise Fokkens are 75 year old twin sisters who have practiced the oldest profession in the world for 50 years! Martine: “We always have liked to be prostitutes, it fitted us as a glove.”

The Fokkens began their careers in 1965 in their early twenties and say that they enjoyed most of their time working in Amsterdam’s Red Light District. They met a lot of interesting and friendly men from all over the world. The Dutch ladies are very famous in the Netherlands as it’s quite special that they have worked as prostitutes for such a long time, not to mention the fact that they are identical twins.

Amsterdam during the 70’s: Martine & Louise pose in the Red Light District.

Martine and Louise still have contact with some customers, who sometimes still call them. Then they go out for a drink together or coffee. “Some customers have become friends. We laughed a lot with our customers. Maybe that was because of us. They always managed to find us again and moved with us. We have grown old with each other. The picture is not right that men who go to the whores are all perverts. ”

In Holland, the famous twin prostitutes are also known as the “ouwe hoeren”, which literally into: the old hookers. This is how Martine & Louise call themselves in public. What many people don’t know is that this has a double meaning in Dutch because, “ouwehoeren” can also refer to someone who talks a lot, which is also something that Martine & Louise like to do all the time.

“You cannot let a man leave disappointed with hard balls, we never do that” – is one of the many remarkable quotes of these lively and special ladies.

A Film About The Famous Twin Prostitutes

The front cover picture of the movie “Meet the Fokkens”.

The Fokkens even have their own movie Ouwehoeren (meaning: “Old Hookers or Old Whores”). The documentary tells the story of the famous prostitutes and their experiences. International Documentary Film Festival Amsterdam (IDFA) described their documentary as: “The twins tell amusing tales on how they came to be in this line of work, how they eventually went into business for themselves, and how relationships in the world of prostitution have changed over the years. Their stories are full of spicy details about their clientele, some of whom come from unexpected walks of life”.

During one of our tours, the twins showed us where they became self employed prostitutes.

Must-see: Meet the Fokkens The Movie

We’ve seen the movie so many times and still find it funny and fascinating! There are only a few films out there about prostitution in Holland and this is definitely one of the best. Martine & Louise share their life experiences within the Red Light District. We think it’s a must-see (if you can’t join our tour)!

MEET THE FOKKENS ON AMAZON

The Fokkens: “We were the first women to open our very own brothel in Amsterdam.”

Not only are they famous in the Netherlands, but also abroad. They have been interviewed by some of world’s largest media companies, such as CBC, Huffington Post, BBC, The Guardian and many more.

Meet and greet the famous twin prostitutes in Amsterdam

You can meet the famous twin prostitutes yourself by booking one of our very special tours called: “Famous Twin Prostitutes Tour in Amsterdam“. Booking this tour will give you an unforgettable experience and quite a few laughs too.

Take a picture with the lovely twins!

It’s not every day that you meet a prostitute, especially not these charming, fun and famous twin prostitutes who have worked in the business for 50 years. This fact alone leads to lots of curiosity and questions. We are proud to say that we are the only tour company that offers a meet & greet with Holland’s most famous prostitute duo. During our Meet the Old Hookers Tour you can ask them anything you like! It gives an unique insight in the life of a prostitute.

We hosted this exclusive tour many times now and people always had a blast! Below are a few of the best questions that our tour goers have asked to the twins.

Meet the charming twins yourself next Saturday November 25th at 5:00 pm. During this unique tour you get to ask them anything you’d like!