The Canals of Amsterdam Exist 400 year! 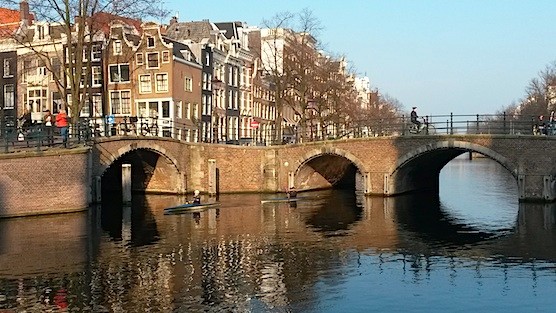 An exposition in the Amsterdam Museum describes the story of the canals. “Do people actually live in these houses?”, is a question which American toerists quite often ask. Amsterdam’s canals are so famous, that visitors not always realize that it is a vibrant metropool. The canals of Amsterdam which celebrates its 400th birthday, is so unique because the canals remained it good shape and also because it remained it’s social and cultural function.

The birthday of Amsterdam’s canals will be celebrated with all kind of activities and with an exposition of Amsterdam during the Golden Age. The century when the canals were constructed. In 1613 Amsterdam started to construct the Herengracht, de Keizersgracht en de Prinsengracht which were dug from the Brouwersgracht up to the Leidsegracht. The first two canals were intented for residential living, but the Prinsengracht and the Singel were “working canals” with lots of work related activities. For that reason, only those canals are directly connected to the IJ-river, which was the commercial port.

Trees were quite unique during that period. The canals were on both sides planted with limes and elms, which was appreciated by the visitors. They wondered if Amsterdam was a city in a forest or a forest in a city. Those long lines of trees was actually the reason for UNESCO to add Amsterdam to its World Heritage Site.

Who were those entrepreneurs who actually lived in those houses? Those weren’t old families. They prefered to live in the old city centre. On the canals lived the “nouveau riche”. From 1585, the population increased rapidly, the number of inhabitants doubled in fifteen years up to 60.000 people. Half a century later, in 1660 this number there were already living 220.000 in Amsterdam. The city desperately needed new houses. The less wealthy people lived in the streets between the canals and in the new district of the “Jordaan”.